it’s winter, and chestnuts are in season. in hong kong, roasted chestnuts are a popular street food. you can smell them a mile away. people also love using chestnuts in desserts, such as cake fillings and dessert soups. for us, we used it to create a filling for our crepe cake (recipe coming soon).

we bought the packaged unshelled raw chestnuts, which makes life a lot easier. but if you’re feeling adventurous, then buy the fresh ones, it’s a lot of work though. you would have to shell the chestnuts, soak them in water to soften the skin, peel off the skin with a knife, and then finally cook them (yeah, i thought you’d see it our way). you can also buy ones that are both shelled and cooked. if so, you can skip the first step in the recipe.

use the cream as a filling for cakes, crepes, and whatever you can think of… or just eat it on its own, we won’t judge 🙂 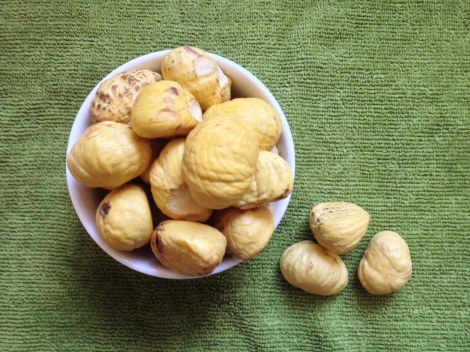 whip the heavy cream until stiff

fold the whipped cream into the chestnut puree